Bio: Strategist, polemicist–trying to peek ahead while awaiting a serious conversation about the Middle East among decision-makers. If my predictions are realized, maybe I’ll turn these posts into a book. Most recently worked as as a Business Development Executive with NAWAH Inc, an American company investing in Basra, Iraq. Previously, I directed the Research Bureau of the Iraqi National Congress in Washington, DC and Baghdad, and was a pro-bono adviser for the Higher National Commission for De-Ba’athification, which I helped establish and staff. I was a Visiting Fellow at the Hudson Institute for a while, and wrote a weekly column for The New York Sun, and a monthly column for Prospect magazine (UK). I’ve published several papers about jihadism, as well as articles in publications such as Newsweek and the New Republic. Also, the author of the monograph Syria Through Jihadist Eyes: A Perfect Enemy (Hoover Institution Press, 2010). My research focuses on the growing threat of Sunni jihadism in the Middle East, emerging Shi’a creeds, as well as prospects for democracy in the region. I’ve traveled widely and extensively in Turkey, Iraq, Iran, Syria, Lebanon, Egypt and Jordan. A graduate of Brandeis University (Wien Fellow). I also paint. The artwork depicted here fits the topics discussed–bleak, foreboding.

The Caliphate Attempted: Zarqawi’s Ideological Heirs, Their Choice for a Caliph, and the Collapse of Their Self-Styled Islamic State of Iraq (Current Trends in Islamist Ideology, Vol. 7, July 2008) 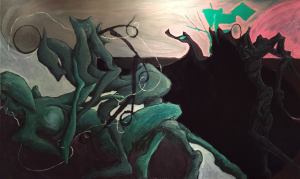